Jean-François Millet (1814-1875), a famous pastoral painter of the French Barbizon School, once interestingly said: “I paint for eternity.” We all know that when artists create it takes absolute freedom to create without any fetters. On the contrary, if the spirit is restricted and suppressed, I believe that they cannot create good works of art. In the traditional society, it has been more difficult for women to become full-time artists. Especially when they are married with a family, they often apply less effort to art than men. If they lack strong perseverance, resilience, and enthusiasm then it is difficult for them to achieve greatness in the arts.

When we open the chapter of Chinese and foreign art history, there are still many successful cases of female artists. For example, in the West, there is the Frida Kahlo (1907-1954), who is recognized as one of the greatest American artists in the 20th century. Another important 20th century female artist is Georgia Totto O'Keeffe (1887-1986); her paintings are classic representatives of American art in the 1920s. In addition, Marina Abramović (1946-), the godmother of contemporary performance art, has been famous for her performance art since the 1970s, and she is recognized as one of the greatest artists of the 20th century. In eastern Japan, one of the first popular female artists was Yayoi Kusama (1929-). She created a personal "dot" symbol vocabulary, which constantly remains in the arts and fashion circles. She was selected as "Top Ten Avant-Garde Artists of the 21st Century". In addition, Pan Yuliang (1895-1977), a famous Chinese female painter, suffered miserably from an early age when she lost her father at the age of one and her mother at the age of eight. At the age of 13, she was sold to a green house in Wuhu by his uncle, who was a gambler. She worked hard to study art in France, however, and became a successful artist. Her struggles and legend were later made into a popular movie “A Soul Haunted by Painting.”

Based on its exhibition of female artists, Taipei’s Yuan Ru Gallery deserves long-term attention and exploration. Especially in July, with the “Women in Art” exhibition, we see how women’s internal characteristics, including maternal feelings, perseverance, and willpower, can translate into amazing artistic creations. As women is the theme of the exhibition, it demonstrates that when art is applied as a full-time job, then the women artists can firmly implement their artistic visions.

The invited Taiwanese female artists include Lin Yang, Yu-Wen Chiu, Yu-Yu Chen, Mei-Hui Lin, Yi-Mei Hsiao, Julie Hsieh. These six artists have been working in the art world for a long time, and each has a different style of creation: Mei-Hui Lin graduated from the Master Class of the Fine Arts Department of Donghai University. Her style of painting is known for its delicate and realistic style. She has long been concerned with environmental protection, plants, and humanities; she is well known for her oil painting depicting the culture of the Iron House in Taiwan, and won the honor of the Silver Medal Award of the 1st National Art Exhibition. Yu-Yu Chen graduated from the Art Institute of China Cultural University. She has a special experience in the texture treatment of traditional-Taiwanese old floor tiles, wall tiles, and walls. Combined with the creation of composite media, she has created a retro history, and won the Kaohsiung Award at the Kaohsiung City Art Exhibition. Yi-Mei Hsiao, who graduated from the National Taipei University of Education with a master's degree in art design, creates experimental art using the female images as social and environmental representation. She also attracted considerable attention with her performance art as “Mayor Yi-Mei Hsiao, the Mayor of Art.”

Lin Yang, a pop star who was popular in Taiwan's performing art scenes in the 1980s, has already applied herself full-time to her work as an artist. In recent years, her creation have moved from her nail as symbol series to her self-portrait series; her personal style is remarkable and successful. In addition, Julie Hsieh, who is the chief executive of Yuan Ru Gallery, is a Taiwanese-American artist and family physician. She is a cross-domain artist and music creator, performing in both art exhibitions and vocal performances. In painting, whether using ink, oil, or acrylic, she presents an expressionist style and interacts strongly with the space environment. Yu-Wen Chiu is an alternative artist. In 2006, she published on the theme of water as an image, exploring the relationship between water and women, and water and nature. The large-scale composite media installations and activities derived from this work has driven her artistic creations for more than ten years. She is active in cross-border exhibitions between Taiwan, China, Europe, and the United States.

While the world is suffering from the severe scourge of the novel coronavirus, the number of diagnosed patients in the world has exceeded 4 million. It seems that the out-of-control epidemic has not stopped, which has caused the economies of all countries to suffer from difficulties and setbacks. Art happens to be the food in the spiritual realm. Although art cannot be used as a cure for the virus, it can be used to soothe the world of extreme scarcity and fear at this moment. These six female artists have been focusing on art creation for a long time. The "Women in Art" exhibition at Yuan Ru Gallery can be regarded as an exploration extension of the spiritual world. Their persistent energy demonstrates that they do not succumb to the voice of the virus, but instead focus the return of the pure world.
Lin Yang 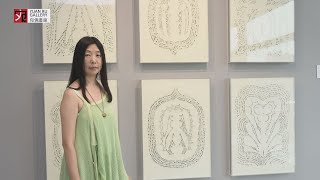 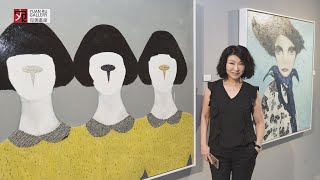 An unmissable gala of female power to pay tribute to Taiwanese female artists!